Day 21…Our adventures today would include a Lord of the Rings location, but first…..

A miners track with history, gradual inclines and declines following the sparkling, rocky waters of  Woolshed Creek to a former incline railway. Evidence here of the Blackburn coal mine abound, old track embedded in the ground, wheels from trucks amongst rocks. Relevant to today a four ton hopper wagon was recycled from other mines before ending up here, where it ended its working life to become another rusting relic from the past. 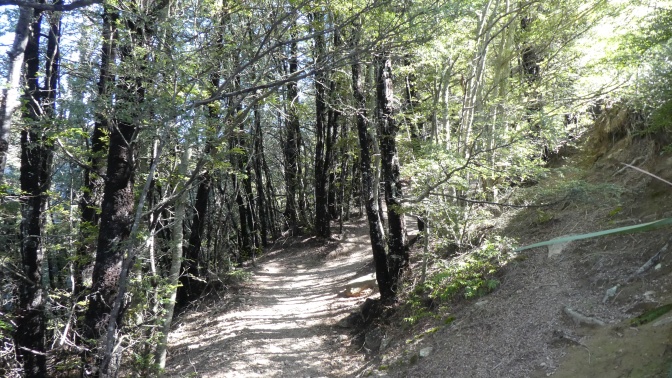 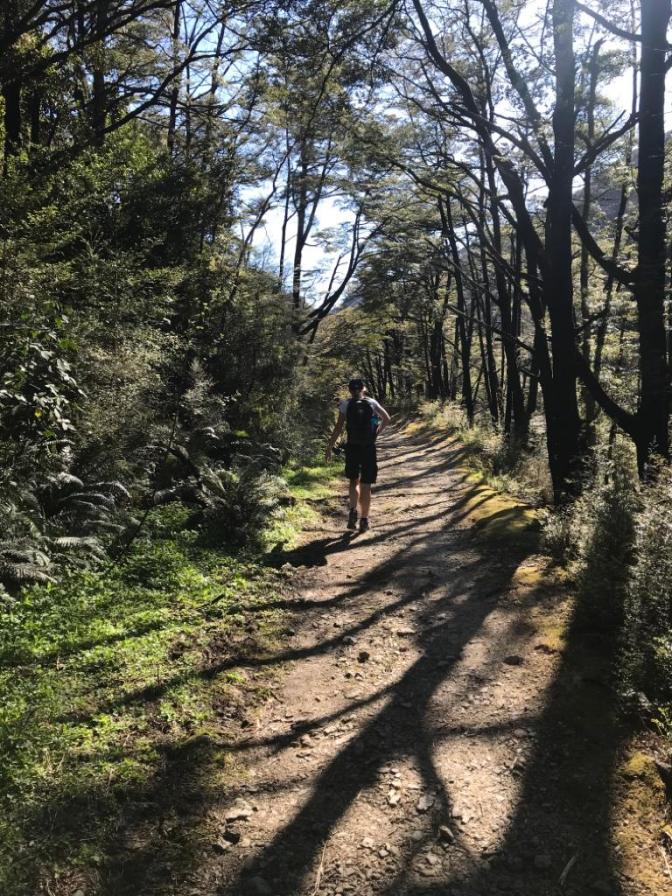 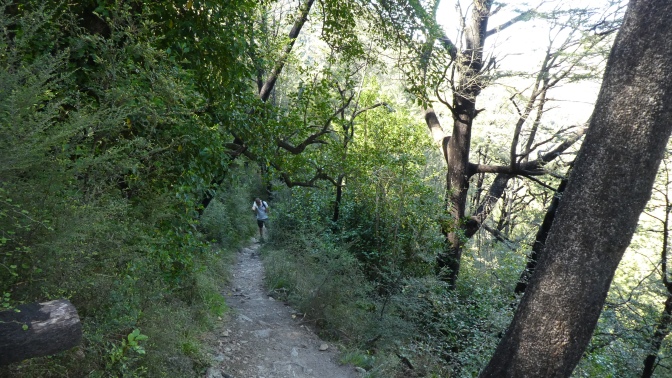 Reaching the plateau the open mouth of the mine greets you, we were exhausted in the heat, admiration for the miners walking the track every day then labouring intensively underground! 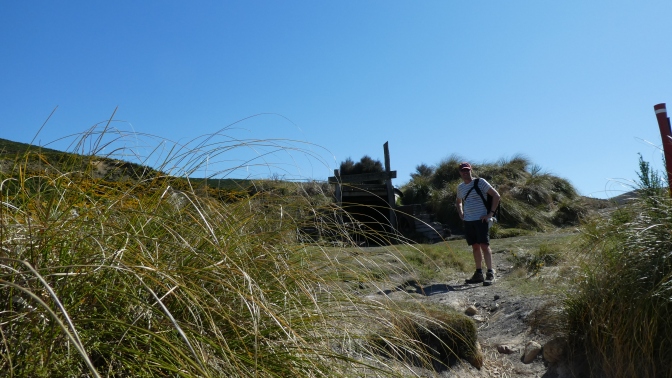 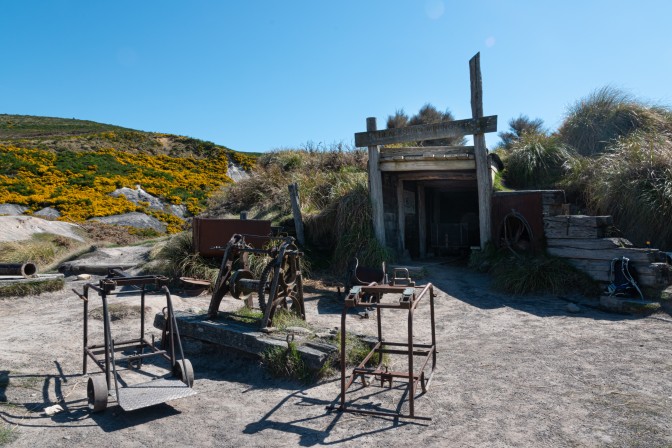 Panoramic views over Valleys and Canyons. 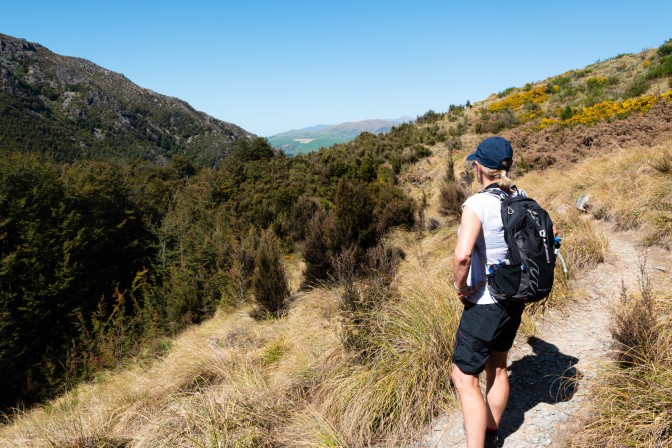 The sidewinder route as part of the loop was our choice of track to return on….Big Mistake! Almost from the off the track zig-zagged steeply downwards and unlike the track up the going was difficult. Underfoot large rocks, roots, eroded sides disappearing down steep drops. Trees fallen across the paths, under and over we climbed.

Paths seem to disappear ‘are we actually still on the track’ but then an orange marker would appear and we pressed on. 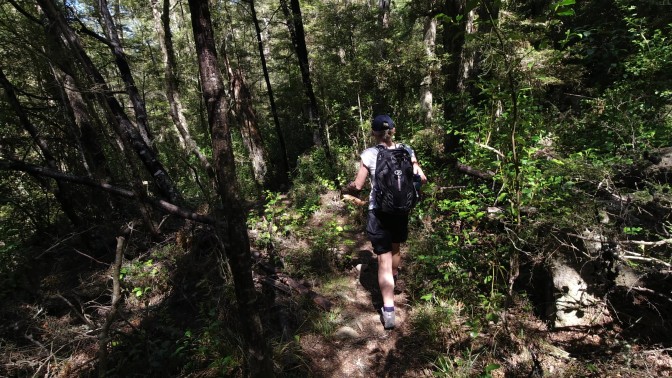 Eventually we had dropped right down, literally as our knees were on the verge of giving up after forty five minutes of rocky, rooted stepped drops and the only way down some slopes was hands and feet in a reverse plank!

But, oh joy of joys the scrabble was definitely worth it as we ended up creekside – almost in it! The blazing sun lit up the fast moving water, slivers of light and shade created glass like patterns as it tumbled over the rocks and boulders.

A short steep climb up and we were on the good track back to Aramoana ready for our next stop. But first a paddle in the freezing waters to revive the feet! 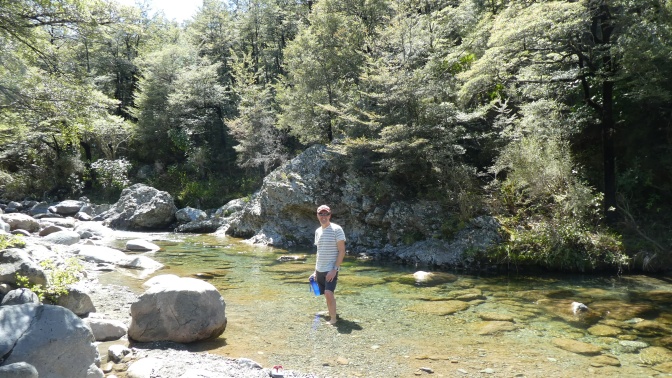 Mount Sunday 1 hour return 2.26 miles….re-christened ‘Edoras’ after Lord of the Rings glory from the second film ‘The Two Towers’. Long 20 km gravel road to get there dust, dust and more dust. The last 10km was washboard bumpy and tourist busy.

Mount Sunday rose out from a flat valley tiny in comparison to the mountains around it. The wind had got up by now blowing through the mounds of still brown tussocks creating a Mexican wave effect as we followed the marked path, first along the flat before making our assent. A fairly shallow run off crossed our way feeding into the fast flowing Rangitata River.

Long-suffering crossed first, splendidly as it happens, boots kept dry. The muse anything but, as misplaced step after step landed a proper wet boot! Obviously the distraction of tiny figures way off on top of ‘Edoras’ was my downfall! 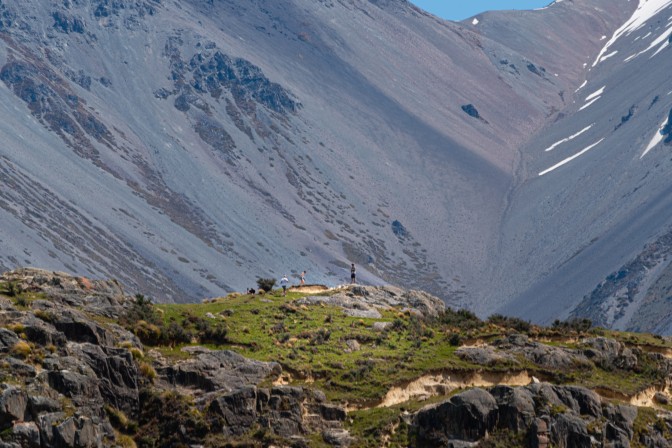 Luckily to cross the actual river a small swing bridge was in place loading only one person at a time!

On the other side grazing black cows heads down oblivious to our pursuits stood either side of the track as we started our assent. Mount Sunday, height 100m is essentially a large rock left after glaciers swept over the valley in the last ice age. Today it is a green mound, good grazing, judging by the pats avoided on our way up.

Looking out towards ‘Helms Deep’. 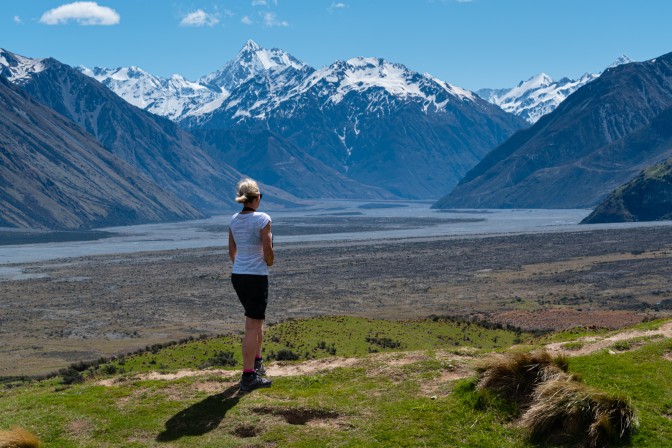 Once at the top winds were so strong we could lean right into them. Trying to take photos was hilarious as our hands shook, the resulting image a blur. 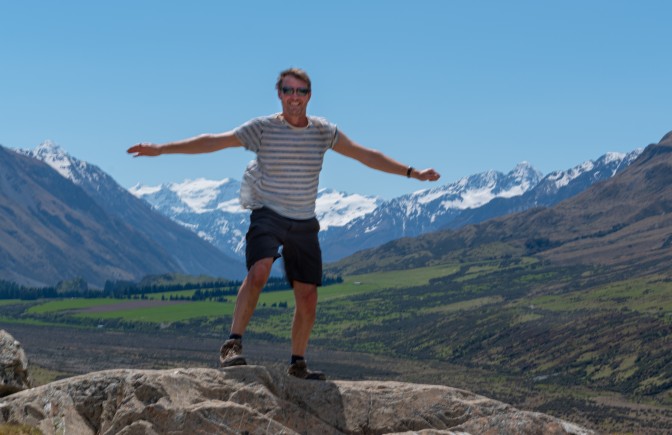 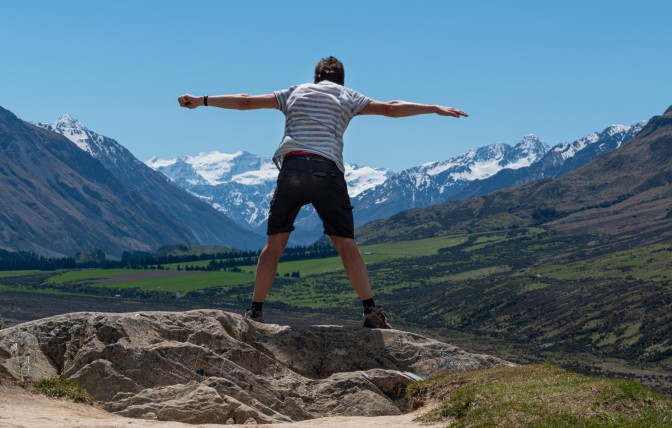 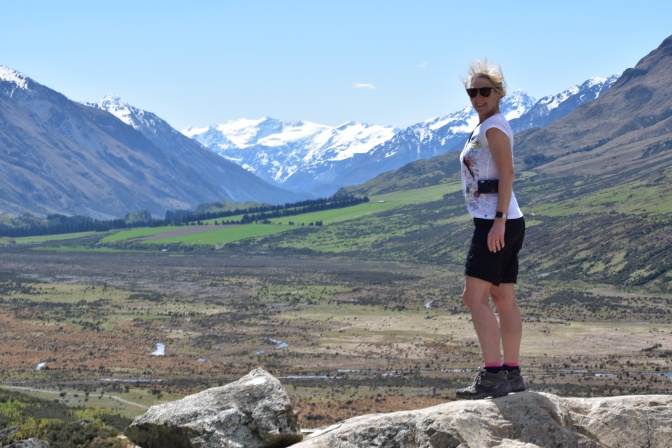 Another couple returned the favour for a couples shoot. A few takes later we and they had a decent image.

Lake Camp freedom camp…We arrived via the gravel road to a busy lake, it being a Sunday, lots of water sports going on by day-trippers. Managing to find a secluded lone pitch, trees on either side  framing the view, it was chairs out to enjoy this beautiful lake. Soon enough it was just us and one other explorer much further along the banks, the masses had all gone home. 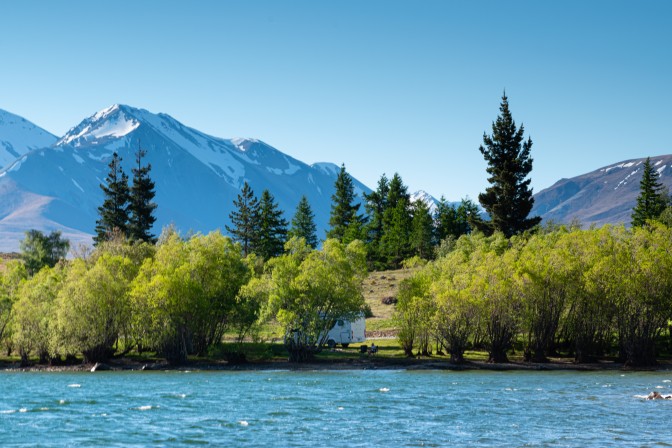 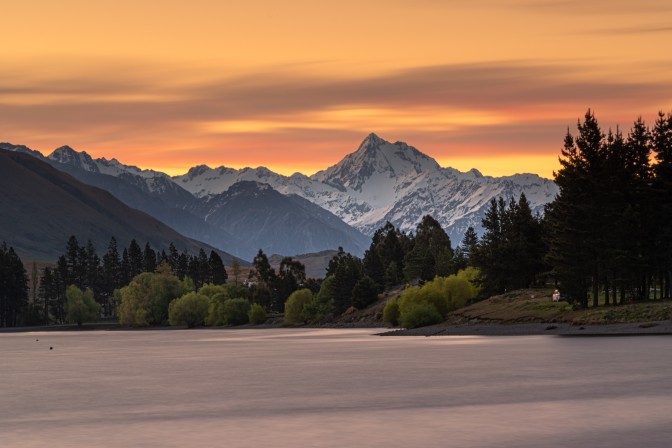