Day 18 Kaikoura – after a night of heavy rain we feared the worst for our reassigned 9.30am Whale-watching trip, already cancelled twice yesterday due to rough seas. Long-suffering on checking the online website found the 7.30am slot as ‘pending’       -hope then – before half hour later ‘cancelled’ – utter dismay!

With our booking looking unlikely, we packed up ready for the long drive to Lake Pukaki although not before long-suffering bought more Danish pastries to cheer us up. 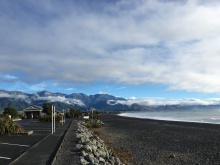 Arriving at Kaikoura Whale Watch headquarters the sky was brightening up although the sea still looked pretty rough. Tentative enquiries revealed our slot was now pending. The morning mists and light levels over the beach and hills made good material for photos while we waited around for a final decision.

Our elation a short time later on hearing the trip was confirmed knew no bounds, we could hardly contain our excitement and disbelief at our luck, especially as long-suffering was all set to leave yesterday! We were warned it would still be rough out at sea though – force 6 – restrictions were in place – no-one with mobility issues, no under eights, or anyone suffering severe sea-sickness, thankfully none which applied to us! 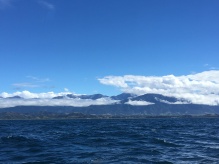 It was rough out at sea, but this only made the trip more exciting as we crashed over the rolling waves the twin hulls bouncing, hitting hard as we sped along in our quest for spotting whales, cocooned as we were below, in our amazingly padded seats. Albatrosses flew overhead, massive wingspans as they glided gracefully above the sea.

Almost straight away into the trip, the doors were opened and out on the outside decks we huddled as sperm whale number one was up on the surface. To see these magnificent mammals this close is totally awesome, and although only a part was ever seen by us above the water, its size could still be interpreted by the shadow under water. The boat was rocking around but not so much as to be impossible for photography. With numbers on these trips limited you were never vying for room or looking at the back of someone’s head.

And then our informative whale guides voice telling us exactly when the whale would dive for the all important tail shot. Amazing how they know the signs every time! We got our shots, big smiles all round as hustling back below stairs like sheep we sped off for the next whale quest. Four sperm whales came out to play in total and one rare hump back sighting although the latter dived before we could get pictures. 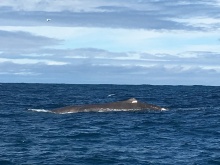 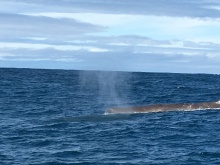 Rare Hectors dolphins we were also lucky to see as they sped through the water by the side of the boat, and Dusky dolphins too. I can’t speak highly enough about the running of this excursion. From start to finish it runs like clockwork – calm, informative, professional, very friendly, helpful and safety conscious, made us feel we were always in safe hands.

Kaikoura Whale Watch will be one our our lasting memories, from our time in NZ, so very special seeing up close these beautiful mammals of the seas.

As we took the coast road SH1 out from Kaikoura we saw first hand the destruction the November earthquake caused and why the area was cut off. Evidence of landslides and road buckling lined the route. Much had already been done to get this road up and running but although open it was clear work would be ongoing for years to come to repair the damage inside and outside of Kaikoura. 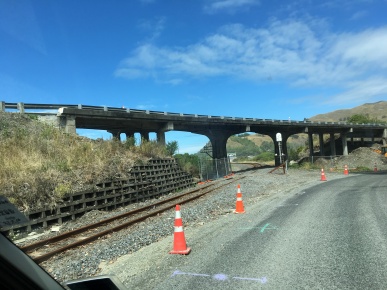 Lake Pukaki Mackenzie Region 8pm – a seven hour drive followed our fabulous Whale watch, I for one was as stiff as a board even with stops! With all our insides and outsides shaken to smitherines on the long gravel road and subsequent boulder filled dips and slopes we found the perfect spot for our nights freedom camp on the edge of this, the largest of three turquoise blue glacier fed Lakes from the surrounding mountains. 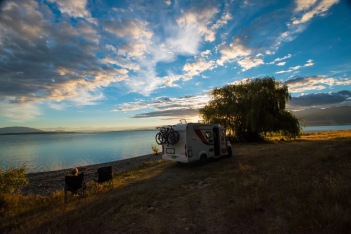 Too tired to cook it was cheese and biscuits washed down with cold beers, mummified by the lake – precaution against the sand flies or other biters about – and eventually bed snuggled cosily together in our wonderful Aromoana dreaming about exciting Whale encounters!