Our adventure begins…… Aside from the usual body search/pat downs as my metal hip set the security sensors into overdrive all my worries about surviving the long flight – elephant legs, blood clots, acute stiffness, plane crashing, hyperventilating over long hours in a confined space – thankfully came to nothing. Flying Air New Zealand, premium economy in their comfy adaptable space seats did much to soothe both hip and overactive imagination.

Clear blue sky was the forecast in Auckland and it didn’t disappoint. A quick shower and change of clothes and we were ready to explore. Our hotel concierge suggested a harbourside walk to the ferry terminal, from there we could catch the half hourly ferry over to Devonport and maybe climb two of the fifty or so volcanic cones Auckland is built on and around. Considering our lack of sleep we were feeling surprisingly energetic!

It was Auckland anniversary day – a public holiday – the quiet harbour would soon become a bustling hub of life as the biggest sailing regatta got underway. 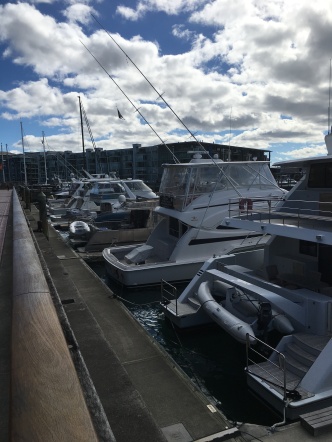 The ferry crossing was short approx ten minutes. We decided to climb Mount Victoria first being the nearer of the two. The journey was straight up from the ferry drop  taking us past rows of quaint shops and cafes. The steep climb up to the top was well worth the stunning panoramic views out over Auckland to the sky tower in the distance and the Bay surrounding us, water sparkling between the many flotillas of sailing boats from small dinghys to stately yachts.

Ice cold beers beckoned on our descent in one of the cafes we passed on the way up,before walking back towards the harbours edge to continue our short tour of Devonports coast route.

Deciding north head – the second volcanic cone was within our range we walked on and up once more. Again the view from the top was just as stunning. Both were once fortified village sites with gun embankments and bunkers. The Navy still maintains a presence here today.

Back down at the waterfront there followed late lunch a tasty affair consisting of: venison burgers, chips and salad washed down with another refreshing ice cold beer, and the standard glass of water to dilute the alcohol effects!

The ferry back was a blustery affair, I was grateful for my hoody, not so the long-suffering who put a brave, now rather fast reddening – no holiday has ever been complete without his starter holiday glow – face as the cold wind whipped through us with the speed of the boat.