This past week our friend continues to make progress from coronavirus. Transferred from ICU to a ward his treatment now includes daily visits from the physio team.

Speaking from experience it is frightening how quickly one loses muscle and strength from long periods of inactivity as so many people recovering from the worst of coronavirus will be facing.

I was bed-bound and on traction for a time after a serious RTA in 2012. Then after major surgery to put me back together, the real hard work started. The physio became my new best friend and my new worst nightmare in equal measure as I had to learn to just put one foot in front of the other.

I can honestly say I would not be doing half the activities I am now if it wasn’t for our fantastic NHS. In the first instance the critical care teams – consultants, nurses, my top trauma surgeon and finally and just as important the Physiotherapists in hospital and ongoing over the years.

It is of course like most things in life ‘you only get out what you are prepared to put in’ scenario. And it is oh so slow, and easy to get frustrated and despondent. My first appointments were conducted in water for half an hour – home from home for me I thought, but after being hoisted in and then floats attached to my arms and legs I was exhausted before I started. This coming from someone pre-accident who could swim anything between 2500 – 3000m in an hour.

Fast forward seven years and two more surgeries, for the most part the downstairs department works as it should. There are exceptions, and sometimes periods of very bad days when the old nerve issues raise their ugly heads. I still exercise although like most people I have lapses but then things do not work as well downstairs reminding me to keep it all going -use it or lose it!

Sometimes even now I can feel a long forgotten deep muscle returning as I remember the knowledge gleaned from my regular physio and a general thirst for information on what makes the human anatomy function as it should.

Yesterday the Long-suffering and I – plus many other keen cyclists without assistance – took on the challenge of Okeford Hill an extremely steep climb and my greatest challenge yet – even with the assistance of my e-bike.

First there was a slow climb up 400ft plus from our house to the top of Bulbarrow Hill – elevation 899ft. Followed by a few ups and downs, a long down and then the 400ft steep challenge up to an elevation of 768ft. Our ride statistics on completion below… 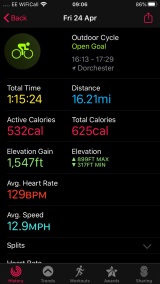 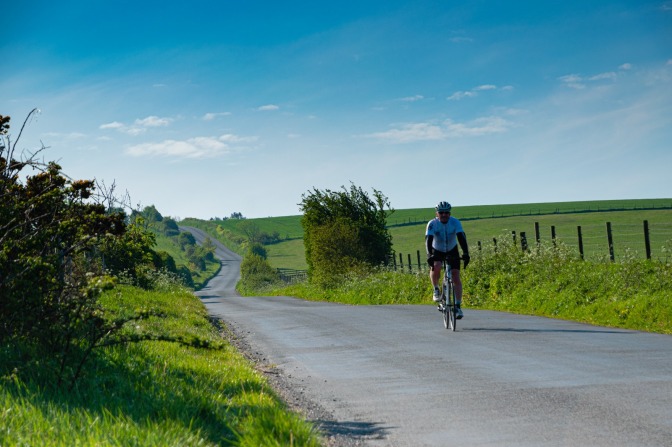 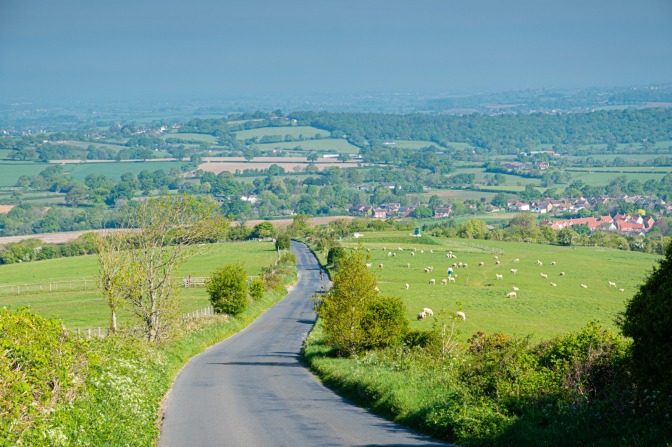 I quite enjoyed getting to the top first and having to wait for Long-suffering for a change, who looked positively ill as he appeared over the brow having cycled the whole way in eco! The views from the top are panoramic splendour and a perfect place for drinks and the man behind the lens to emerge….. 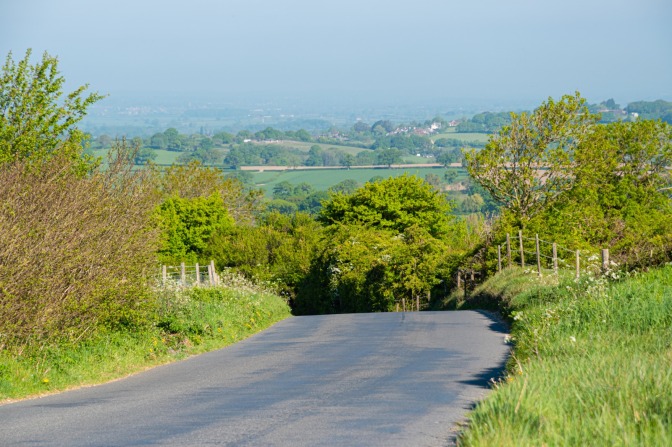 As lockdown continues Spring growth in the garden still surges on without restraint. Happy to say my lavender plants have chosen life over death after their renovation prune.

Clematis Montana has burst into bloom covering a trellis and an old dead arching prunus tree – also hosting the bird feeders hanging beneath its bough. A good subject for a watercolour and the man behind the lens to capture some magical shots. 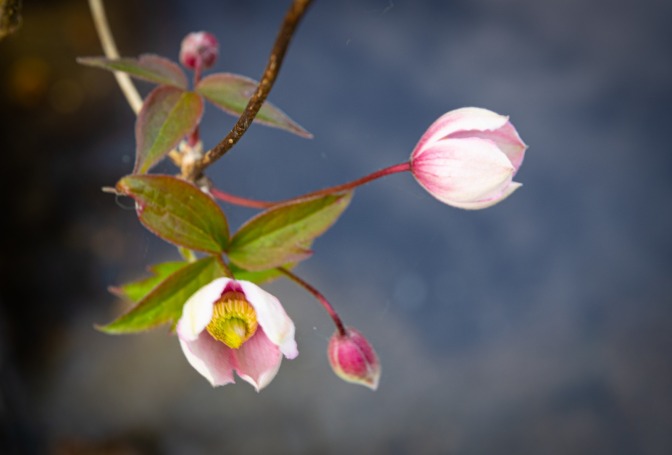 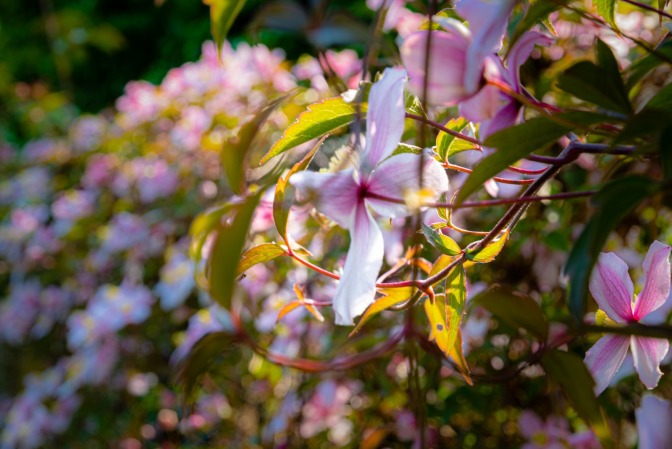 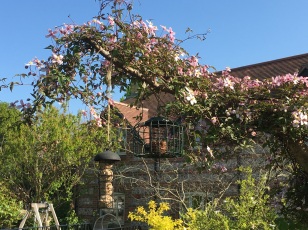 Elsewhere in the garden the Wisteria is still producing more blooms covering the house wall, at its roots the Bearded Iris have burst into flower, tall and elegant they rise up to the height of the window sill. My art challenge was to capture plein air style their delicate falls.

Alongside the stream white pink floral rosettes of Damara peltata rise up from the ground eager to please the eye before its large red tinged green leaves follow shading out light below. The first tiers of the Candelabra primula have started flowering, these will be followed by many more in a kaleidoscope of colours. 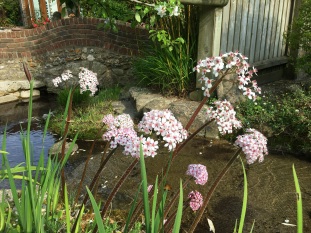 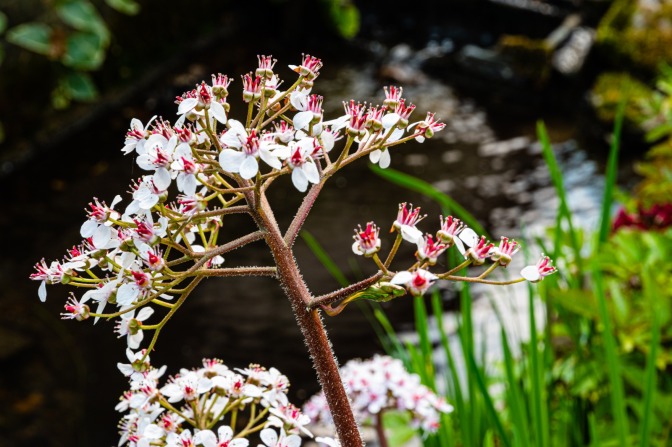 The new tall box spiral in its equally tall container will hopefully protect our grandchildren from toppling over the edge as one accidentally did last year. Luckily Grandads quick reflexes saved the day. On moving here four years ago one of the first things we did was to erect iron railings over the otherwise open concrete bridge for protection it also enables them to play Pooh sticks in the increased flow after heavy rain. 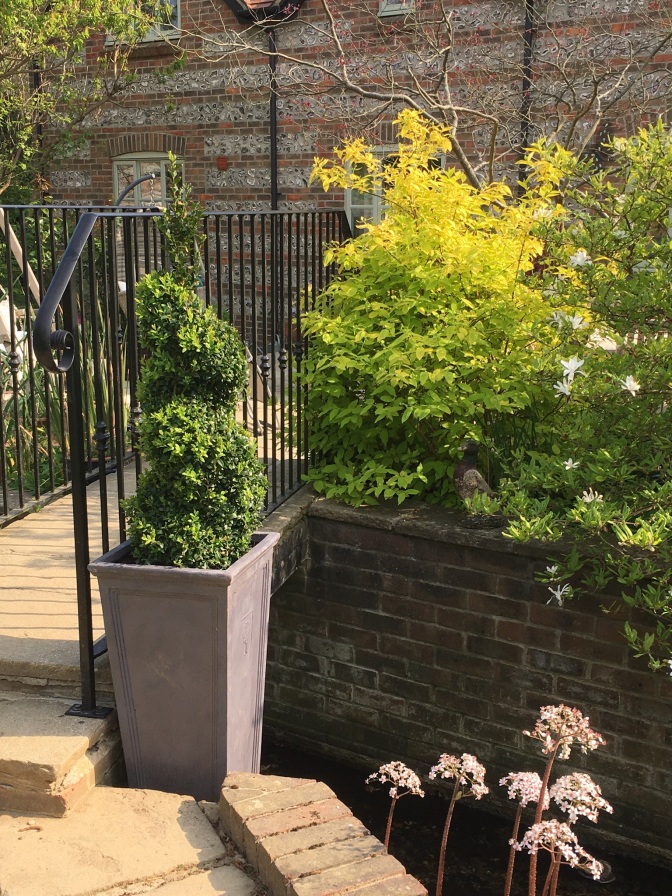 Cornus controversa ‘Variegata’ – common name wedding cake tree – is leafing up well  in spite of a winter sitting in water.  Behind, the beech hedge last to green up offers us a glimpse of the borrowed landscape beyond our boundary via the porthole still being trained almost four years on from creation. 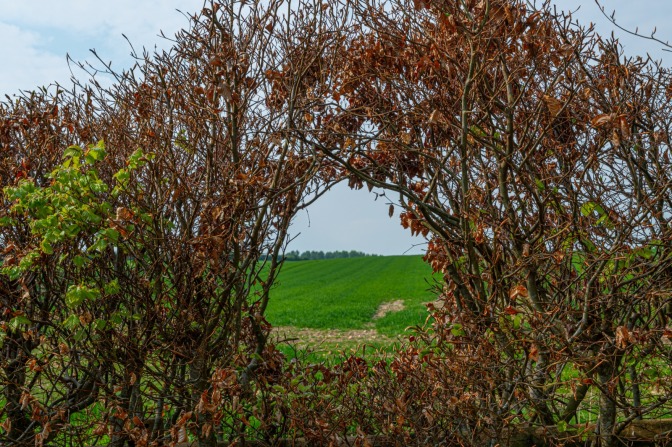 The first Camassias leichtlinii  are out in the meadow these are blue but ‘Alba’ will follow and Camassia quamash. 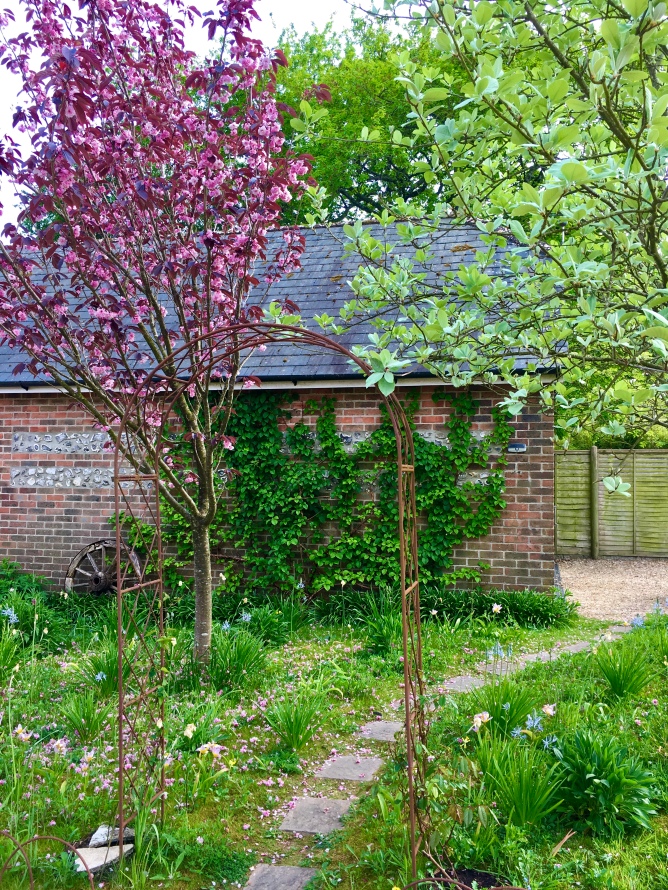 Keep safe and for anyone recovering from any form of enforced inactivity of mind or body especially in these current times don’t give up! This poem by John Greenleaf Whittier titled ‘Don’t Quit’ was sent to me while I was trying to recover. At my worst both physically and mentally initially although it struck a chord within me, for a time I was still ready to quit. It was pinned up to be seen everyday and it is still in a place I pass first thing every morning on my way out to the garden and the beauty of the living things that await…. 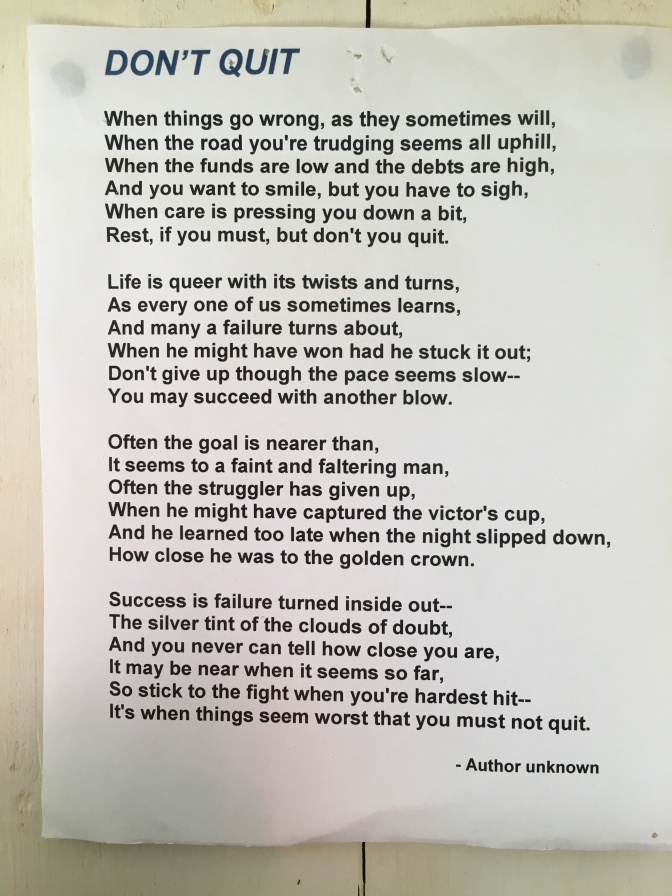