Day 30. Early Ferry from Picton to North Island, a sad goodbye to the beautiful and diverse South Island…. 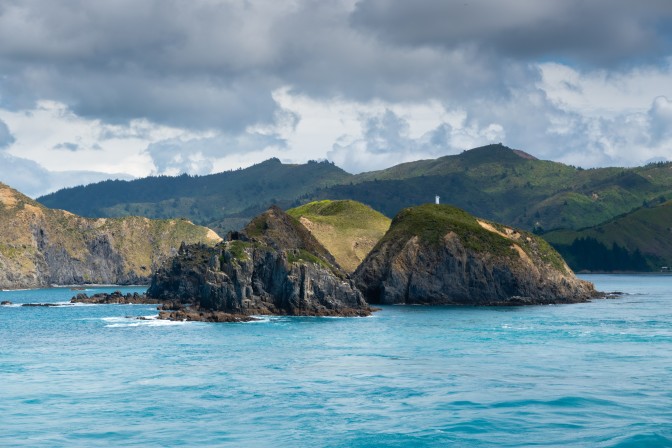 Hello Wellington and the North Island….

Long drive from ferry terminal to North Egmont Camp, Mount Taranaki. Landscape change from mountainous terrain in the south to rolling green pasture in the north.

Day 31. 5am beeping wake up call from the fridge…the gas had run out, half asleep we both stumbled around in our small space before long-suffering braced the -1 temperatures to change main gas bottle to emergency spare. Out to viewing platform – the muse in her pyjamas – for sunrise…… 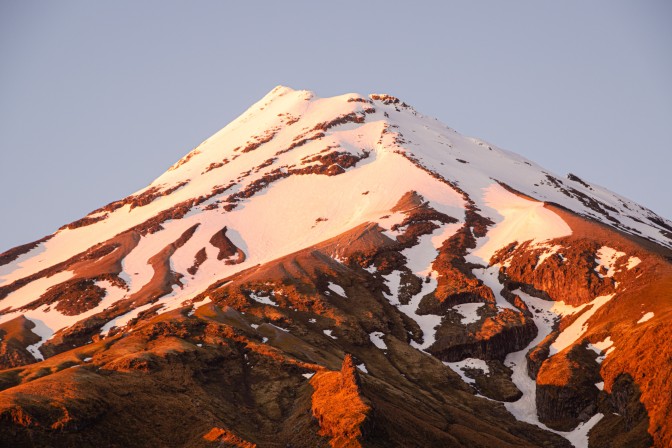 From Camp The Maketawa Hut round trip 3 hour return….

This was a walk with a difference, the start took us through magical montane forest, overhead canopies of tree arches, shafts of early morning sunlight glinting through creating intricate patterns as we followed the well marked track. 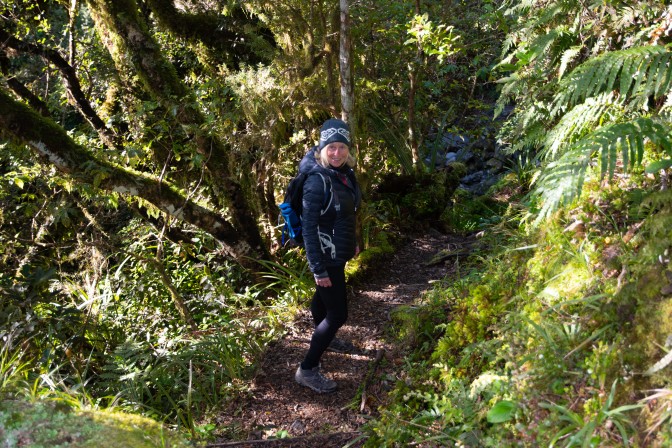 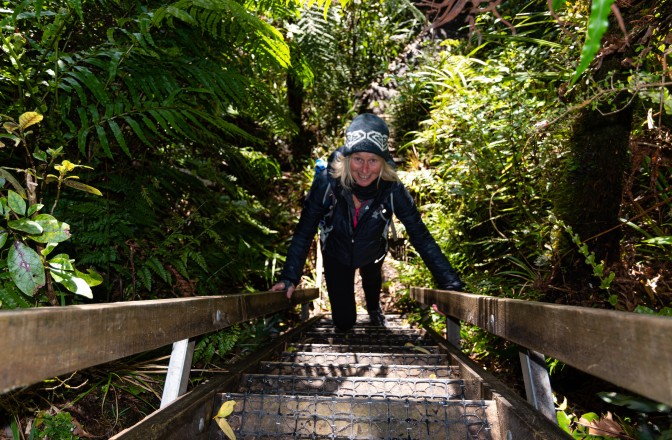 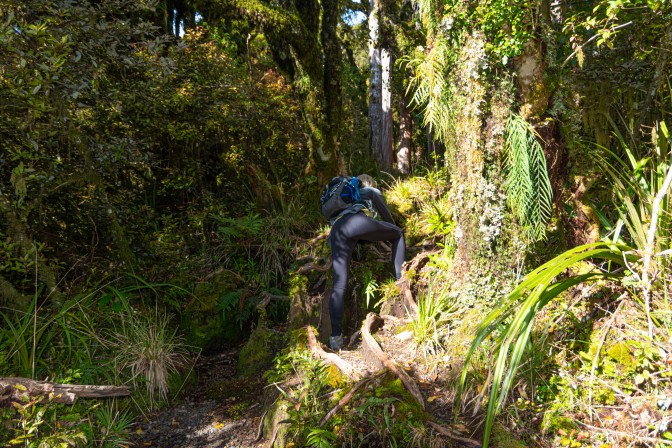 Eventually thick forest was replaced by steep inclines out onto the outer exposed marked track. 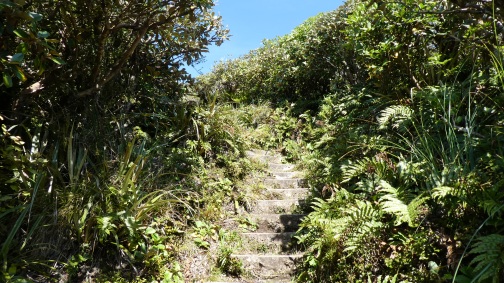 And then the whole…. 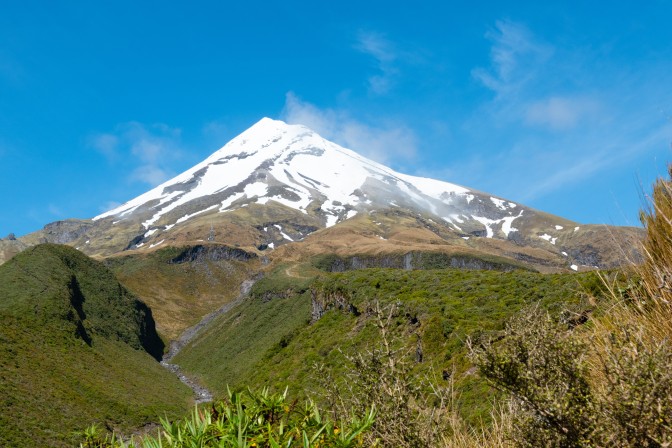 View from the opposite direction back to our camp…. 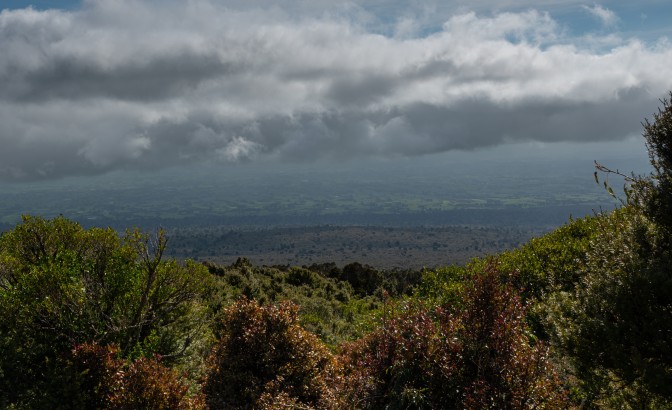 Maketawa Hut a place to hunker down should the weather turn extreme!

A brief snack stop on the outside viewing deck and we were ready to head uphill to join the translator road and our route back down…. 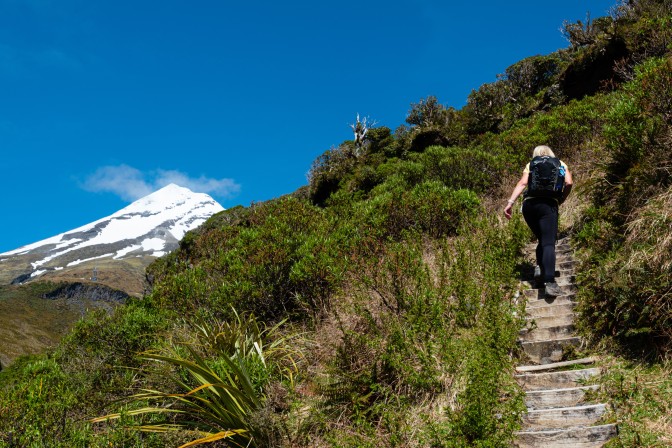 Only we didn’t go down…..both deciding at the cross tracks we could make it up to the snow line and Translator Tower at 5,004ft.

The tower, not far then! 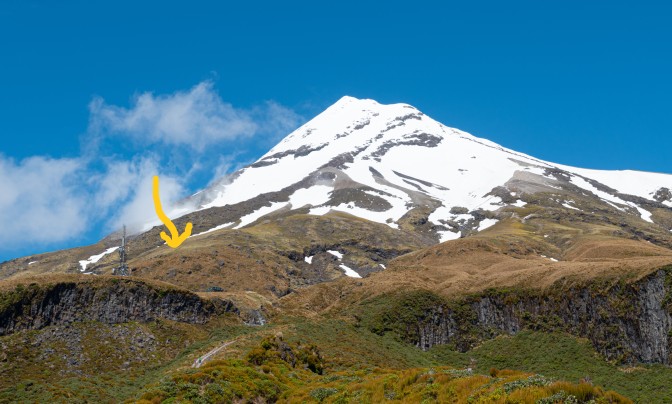 This would be our biggest challenge to date. Straight up on a concrete road track, my feet at 30 degree angle the whole way up meant my lower calves by the end were feeling the burn, so much so just to relieve the pressure I was at intervals walking backwards. 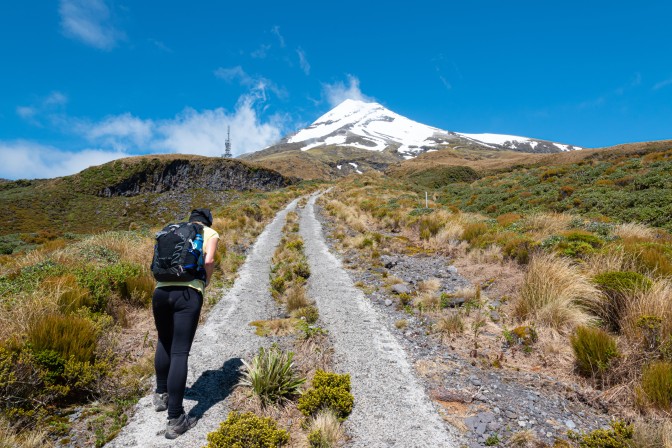 Halfway up a seat to catch our breath and much to long – sufferings delight my secret stash of Whittaker’s Chocolate. 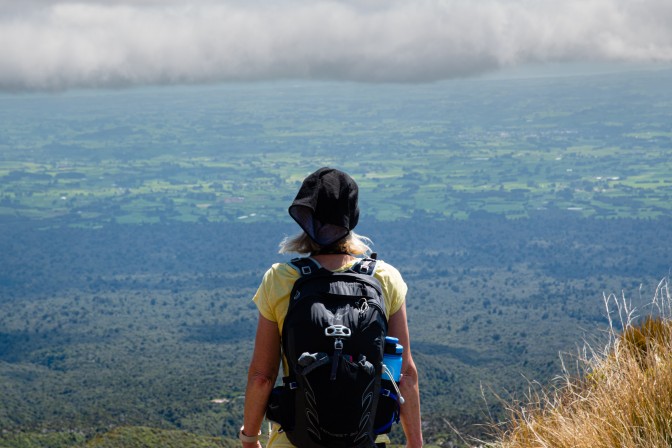 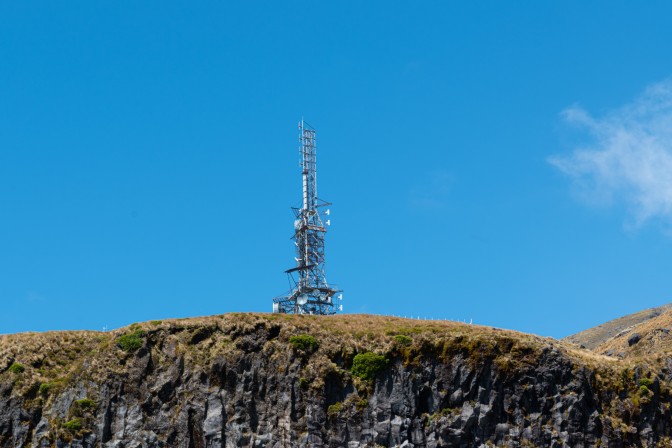 We made it to our own summit above the Translater Tower and achieved a personal best – our highest climb to date together. 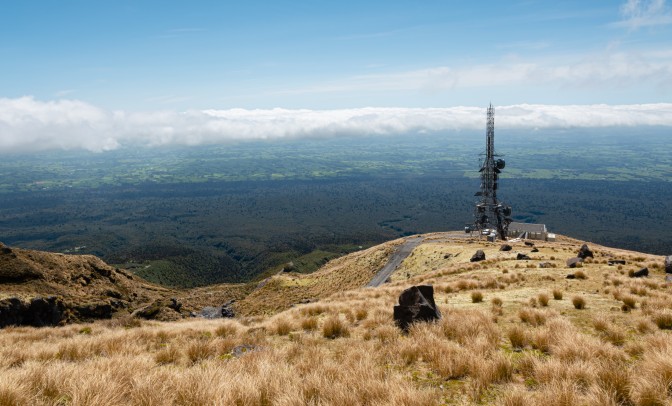 Before any lunch could be consumed, sweating man had to discard the t.shirt to drip dry over a rock while the light breeze air dried the rest, meanwhile the muse was adding layers back on!

Conditions were still favourable for us to continue on our new route The Translator Tower Round Trip past Tahurangi Lodge. 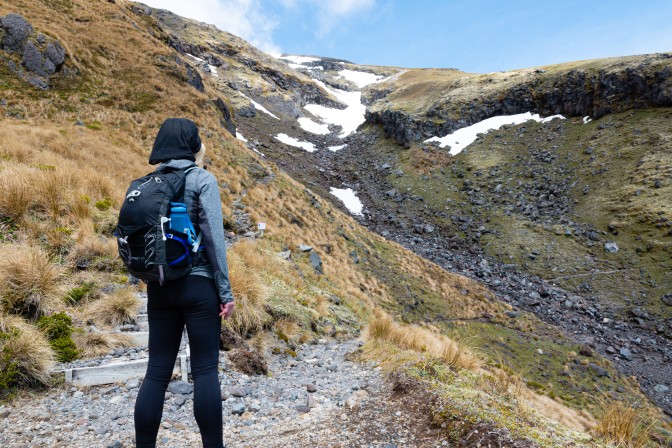 Almost from the start this was a new challenge across a ridge below ancient lava flows and an ignored by us divide up to the Summit Track – thick snow and vertical rock – we were not carrying the correct gear for that climb. Some tried it though! 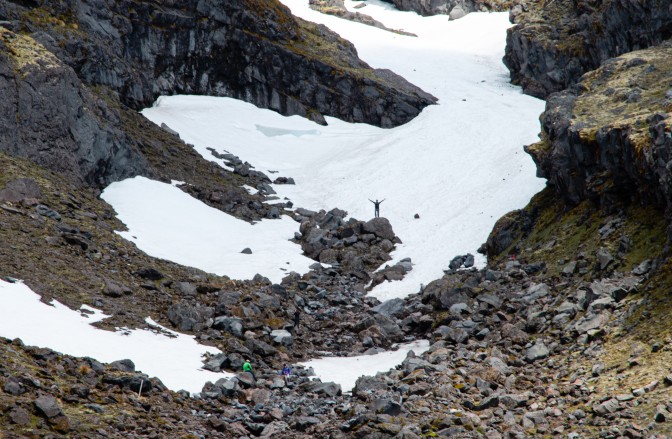 The track twisted and turned across exposed alpine terrain leading to what looked like a recent land slip. Flat track barely visible just an unstable scree, one slip and over the edge. With trepidation – long-suffering and his fear of heights looking anywhere but down – we gingerly made our way across. 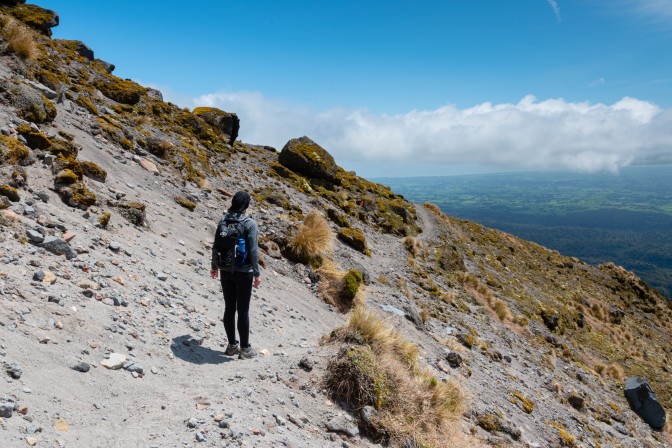 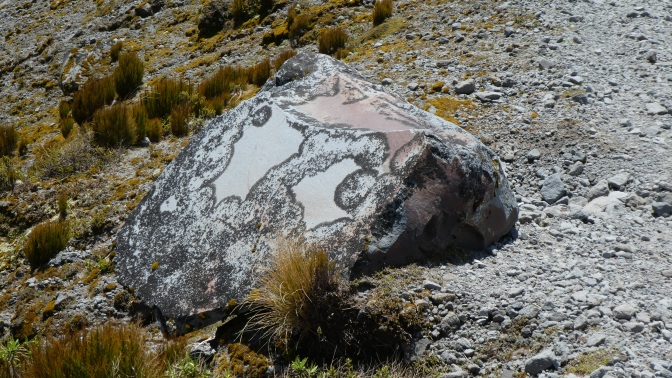 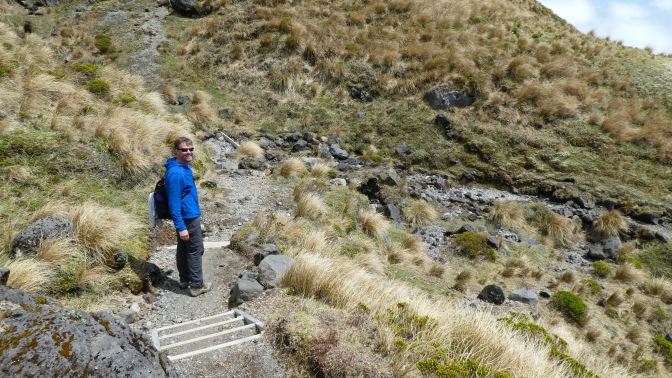 Towards the end of our descent still in one piece, we were reminded of a brave climber who died rescuing another by a memorial erected in his honour….

Back at base then, walk statistics: 6.59 miles in just under 5 hours including stops.

Dawson Falls Road End car park Taranaki our second freedom camp for the night after a garage stop for gas refill and fuel. 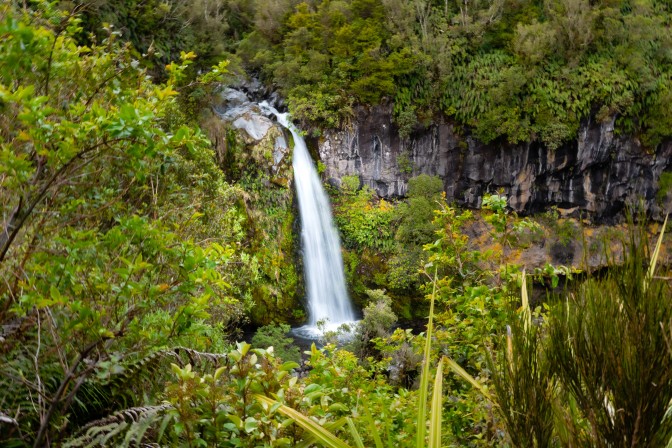 A further track led us down more steps – my glutes and leg already tired, wobbling at the inevitable return back up! 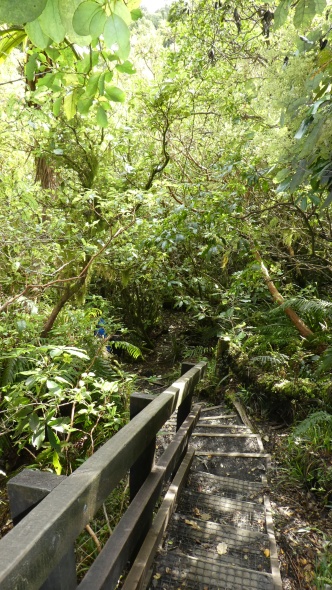 Finally this stunning waterfall shown in all its glory….

The muse was put to work in front of the lens….

Man behind the lens shooting an evening sunset from camp lookout, freezing cold, the muse summoned by text for extra layers!

The resulting sunset……a calm before quite literally ‘a major storm’!

2 thoughts on “A Dormant Volcano!”