Day 16 Sunrise at ‘That Wanaka Tree’

Mount Iron Loop Walk…. A short 5km walk, popular with Wanaka residents as well as tourists. According to a local, one direction on this two way track was an easier climb than the other. Long-suffering glanced over hopeful but resigned, as his muse moved off in the direction of the steeper climb!

Throughout this walk unlike any other so far, the steady hum of traffic from the main road below was nearly always in earshot.

As we made our assent, looking down Albert Town and Wanaka spread out below us. 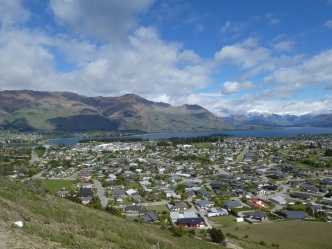 The white flowers of some Hawthorn trees  – Crataegus monogyna lined some of our route. Step ladders instead of stiles!

The track was steep and craggy in places making us breathless in the hot sun as we neared the top, discarding layers at intervals.

Reaching the top a 360 degree view greeted us, as well as a cold wind making us reach for our discarded layers. A group of well behaved dogs posing for the camera.

Clay Cliffs of Omarama…. A 12 km detour seen from the highway on our way to Lake Pukaki….

The cliffs are reached via a gravel road, long stretches, of which most are incredibly bumpy – think driving over a washboard. But wow! Just when you think you have seen everything another landscape comes along to surprise you.

These incredible cliffs are on private land, the owner charges 5 dollars per vehicle, believe me they are worth it.

Reached by a 30 minute walk the cliffs command your attention with their towering presence. Rugged spires, pillars and arches separated by narrow ravines show stripes of yellow, orange and grey, made up of layers of gravel and silt.

A narrow entrance led to what is known as the Cathedral, inside sky scraper walls of pipe like spires reached for the sky. We felt we had entered another world, lord of the rings comes to mind. The clay cliffs really are off the beaten track and not really advertised, hence we almost had the place to ourselves.

Lake Pukaki freedom camping …We stayed beside the Lake 3 years previous. Long-suffering was keen to stay again. Very keen it turns out, as once more I drove for miles and miles down gravel roads in search of the perfect ‘freedom’ spot by this vast lake. Every so often a track was found and out he got running out of sight only to come back shaking his head as the spot was either too small, too uneven, or in the case of most spots a barren logging destruction covered in dead chopped trees lying in funeral pyres.

Approximately 45 minutes later we found – desperate by now – the PERFECT place. We were in the middle of nowhere by a beautiful turquoise lake completely and utterly on our own. We really had found our own slice of paradise!

One thought on “Our Road to Paradise”