Day 8….Our beautiful overnight spot had one flaw, little shelter from the constant, deluge of rain and strong gusts. The roof drummer was back with a vengeance, as was the rocking and rolling side to side. Up early for a morning photo shoot…..

before a further drive to Milford sound. We were weary before the day had even begun as we set off through the morning mists for the half hour drive to…..

Key Summit Track…. three hour return. The track starts at the divide carpark off the Milford Road and for the first part follows the well known Routeburn track before branching off on a steep winding ascent to the Summit.

This walk was a must see from Long-sufferings itinerary, ideally in clear rather than murky conditions. We were not expecting great things, but as luck would have it the skies started to clear a little and snippets of blue appeared. Rumour had it this was a popular track, we were expecting it to be busy. An early start along the well laid track through native forest we didn’t see anyone for a good mile. The one couple we did see on their way down were disappointed as the visibility for them was murky up at the top.

Unlike our last strenuous walk this one was void of any steps and instead followed a gradual climb zig-zagging to the top with a glimpse of mountain range through gaps in the forest. A bridge spanning a rushing waterfall with a sheer drop below sent Long-sufferings legs to Jelly. 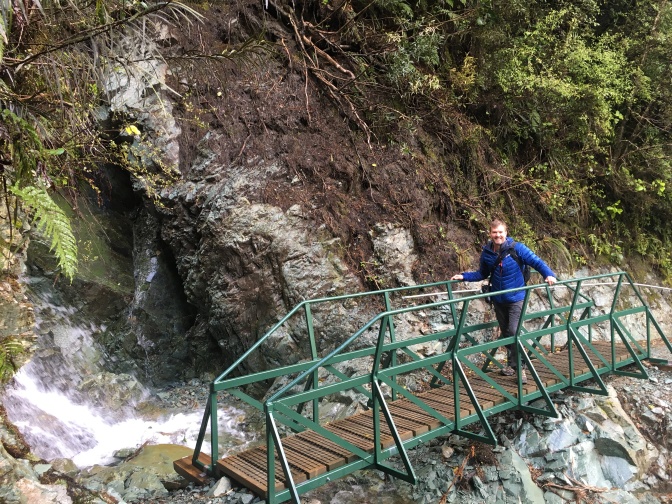 Eventually as we started to emerge from the bush over open ground snow capped mountains stretched before us. Conditions were now perfect, blue sky, fluffy white clouds, perfect light, to say Long-suffering was excited would be an understatement!

And just before the summit if the excitement and altitude got too much there was a strategically placed rest room if required!

On reaching Key Summits ridge the 360 degree head swivelling views of the Darren mountain range and Holyford, Greenstone, and Eglinton valleys was spectacular like nothing we had seen so far, and the best bit…we had it all to ourselves.

While Long-suffering hid behind his lens the muse sat on a rock to try and capture a small part of this wondrous panorama in her sketchbook this time using ink, with a view to applying a wash back at base. Simplifying this expanse did not come easy and more practice would be needed! 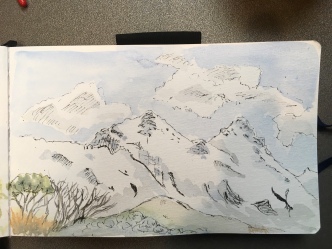 Applied wash back at base

The muse did help unbeknown to her, caught in a moments sketching, from the man behind the lens for his perfect composition!

Still alone at the summit we took the loop walk through alpine tarns and on up to a further viewpoint of Lake Marian.

Animated by our good fortune – weather and crowd free – we started our descent, within ten minutes our way was peppered with tourists heading on up, lucky indeed!  Total elevation was 3,133ft and took us 2 hours 17 minutes not including down time at the top. Back at base we drove on 2 miles with amazing snow capped mountains in constant view to……

Marian Lake track 20 minute return. We chose the shorter option walk starting with a very bouncy swing bridge spanning the Hollyford River. A little jumping from the muse raising a smile and stern face in equal measure from Long-suffering as he tipped side to side! 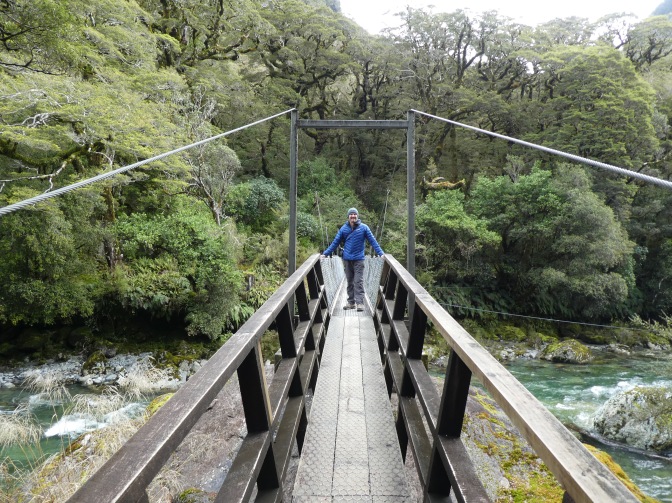 Continuing on, we enjoyed an easy walk through mature beech forest. 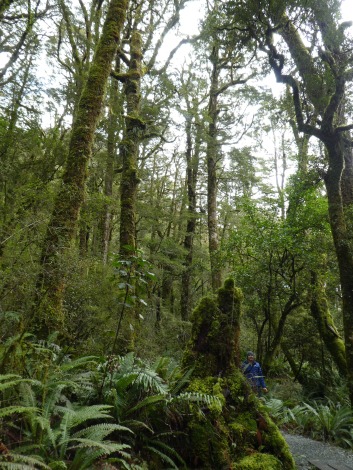 Eventually leading us to ‘The Gantry’ a suspended walkway against the rock face above the crashing rapids of Marian Creek.

At this point the walk extends to the longer, difficult hour long tramp to Marian Lake, we chose to walk back, and drive on through the Homer Tunnel to Milford Sound……

Homer Tunnel….an impressive feat of engineering dug out manually through sheer rock, this unlined tunnel is 945 metres above sea level and 1.2 kilometres in length with a gradient of 1 in 10. The traffic is one way and controlled by traffic lights. I was the designated driver to take us through this daunting, long, dark, rugged tunnel allowing Long-suffering to road test another gadget, his go-pro! 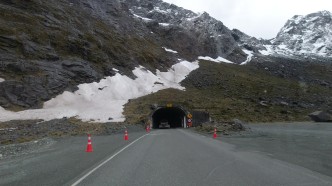 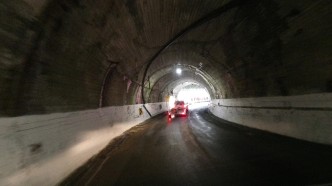 Once safely through and out the other side we continued on another 5miles to…..

The Chasm….20 minute return loop forest walk to dramatic views of the Chasm from two bridges. Our last walk before our overnight stop, the short easy forest walk took us alongside the Cleddau River.

A series of waterfalls cascaded and swirled eventually the rushing water squeezed through v shaped spaces between sculpted rock shapes into a deep dark cavern.

Completly wowed and in awe of all we had seen we drove the half hour to Milford Lodge nestled at the foot of the mountains at the entrance to Milford Sound. Our over night stop for some rest and relaxation turned out to be a 5* Lodge. Fully equipped Kitchens, warm communal lounge area, piping hot showers, and a lovely restaurant where we took our first night off from cooking.