Day 4…. Lighthouse at Nugget Point…we took the main road to Kaka Point and from there the coastal drive up to the Lighthouse. As we drove the heavens opened, rain fell hard then intermittent, finally after an hour we reached the car park, a final shower, after which the sun came out and stayed out for the rest of the day.

The short steep walk up to the lighthouse saw sweating man return as his woolly hat and jacket were quickly discarded. 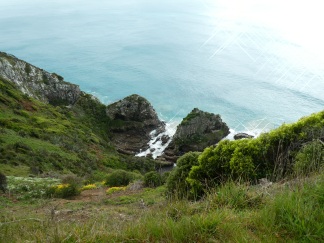 The lighthouse at the point has stood since 1870 warning vessels of rocks and reef below and was manned by keepers until automation in 1989. Looking directly out from the lighthouse across the sea large rocks formed a circular shape, the largest showing a deep hole carved out by the relentless pounding of waves. The noise from the waves and the strong winds were at times deafening I could only imagine how cut off, lonely and exposed the keeper at this remote point may have felt for months at a time. Walking back, Long-suffering ever after his best shot was disappointed the pathway to the higher viewpoints were closed due to the crumbling terrain underfoot.

Cannibal Bay and Surat Bay…. We had it on good authority we may glimpse sea lions here lounging on the beach but first we had to get there! The drive once off the main road changed to gravel tracks, steep, winding, very narrow in places with sheer drops to farmland and sheep below! The few passing places just as treacherous with deep grooves to lose a wheel in, nevertheless we continued on, long-suffering calmly negotiating and his muse holding on for dear life issuing instructions causing his eyes to raise and his mouth to tut at my neurotics – a side effect from my  head on car collision! Eventually all was well and we arrived safe and unbroken, happy to see another motorhome had tried off roading too!

Cannibal Bay was a huge long expanse of flat sand backed by dunes and grassland. Compared to the other beaches we had walked on shells were few, as were the Sea-lions – they were non-existent! We walked to the end in case they were relaxing on the rocks and then through the dunes and grassy flax bordered paths to Surat Bay. 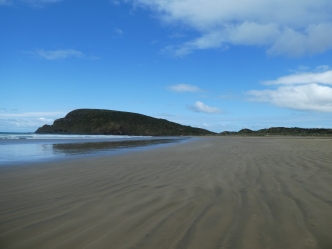 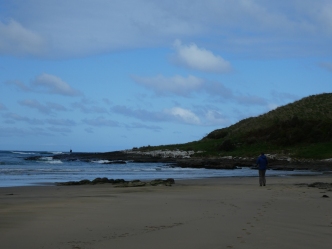 A Family two adults and three young children were on the beach the latter with their bright yellow and red coats looking at an upright mound which in turn was watching them….they did seem to keep the required distance of ten metres. The female sea lion was big even at a distance as we entered the beach. She seemed happy to sit even with excited children, Long-suffering immediately got behind the zoom lens, his regular muse had been replaced.

After maybe ten minutes her demeanour changed and it was clear we were no longer welcome as she appeared to chase the children who not understanding danger thought it funny although the parents were quick to call them much further back. How quick she moved, ungainly yes but so powerful in her lolloping gait. Moving much further away I managed to get some video footage of this lone female, at one point she had laid down and rolled in the sand, flippers waving in the air. Eventually we were all herded back to where we came in. We left, the family stayed and after it turns out she had a pup nearby.

Purakaunui Bay…. Our D.O.C. freedom camp for the night was again reached via a gravel road this one not quite as scary and I was driving – meaning control and less anxiety, for me anyway!

Only one other camper was parked when we arrived, the grassy parking area had few flat spots some parts the ground dipped dramatically, care was needed with position. We were lucky, getting there early meant we had prime location, side on looking out onto the beautiful bay.

Steep grassy, sheep covered cliffs some vertical barrelled down to the beach on one side, a long narrow creek had carved out a ridge as it met the sea creating a sandy ledge to paddle to. The sea stopped short of coming right in while we were there leaving the sand and rocky beach exposed enabling us to walk around the corner and continue over some amazing rock formations.

Once we had explored our surroundings, long-suffering gathered his camera and kit to capture some seascapes. Meanwhile I grabbed my watercolours and sketchbook and found a suitable rock to perch and try out my first Plein Air watercolour on location! Forty minutes later……..