Day 4 continued – KariKari D.O.C. Camp, leisurely afternoon lazing on yet another beautiful sparsely populated beach. The sea beckoned me in even though it was freezing. Swimming the bay, it took awhile for the long-suffering to join me with much cajoling on my part. He did his usual routine two tentative steps forward followed by body contortions as he sideways ran away from the breaking waves to avoid getting wet, not really the point!

Day 5 – This was to be a long driving day to beat the bank holiday Monday traffic around Auckland. I was first designated driver to start us off – my driving all day yesterday getting the thumbs up – I had driven on the flat, up and down tight winding roads with sheer drops into forests below and long gravel roads creating a dust storm behind as Aramoana bumped along to the sound of jangling cutlery, pans and bottles.

Heading south, back out on the gravel road, we were joined by a pack of dogs surrounding Aramoana, ferociously barking and snapping at her wheels. Worried I slowed even more – we were now crawling at snails pace! Long suffering was no help just laughing and shouting ‘drive on, drive on’! I did, and thankfully there were no fatalities as we left them and the gravel road behind for more open roads and photo opportunities.

View from another viewing platform looking down on a mountainous sand dune in Opononi, we just had to take another memorable photo!

Waipoura Forest – Visit to the largest, oldest known Kauri Tree, Tane Mahuta, meaning ‘lord of the forest’ age not known but estimated to be 1250-2500 years old.

A thirty minute drive on took us to Trounson Kauri Park and a walk through native bush filled with these huge imposing trees young and old – the oldest being 1200 years old. 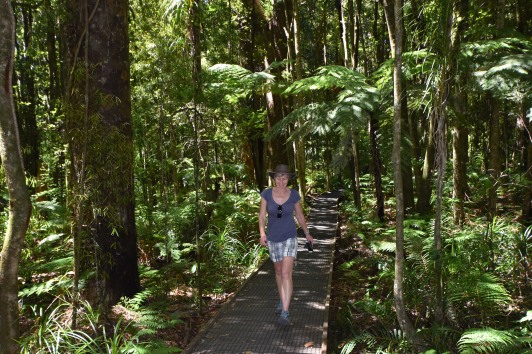 Our time in the Northland was coming to an end, in only one day we have driven through spectacular pasture lands, rolling hills, huge forests and amazing seascapes. It was now only left for the long-suffering to take the helm and drive us safely through Auckland and on to the next stage of this amazing road trip……